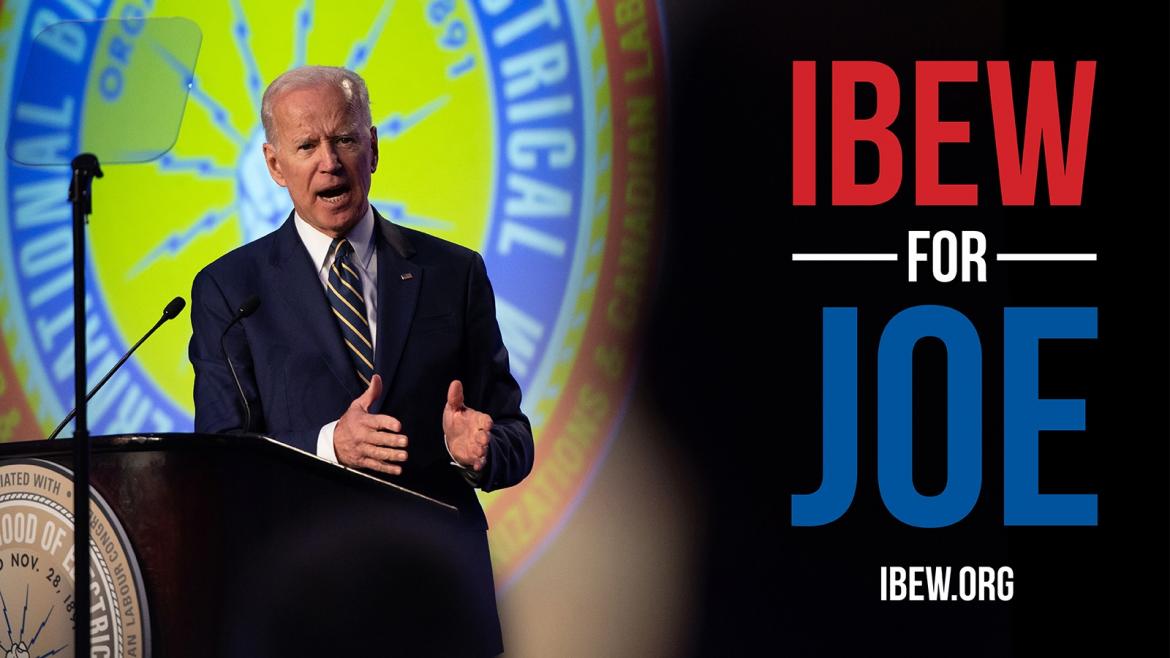 The leadership of the International Brotherhood of Electrical Workers, while attending its annual officers meeting,  unanimously endorsed Vice President Joe Biden to be the next President of the United States.

“Vice President Biden has been a longtime friend of working families and the IBEW,” said IBEW International President Lonnie R. Stephenson. “Joe has a long record of standing up for union members, and we believe it’s in the best interest of IBEW members to elect him our next president.

“Each of the Democratic frontrunners stands solidly with the IBEW on issues of workers’ rights, including the Protecting the Right to Organize (PRO) Act, which would provide millions of workers across the country with additional protections to organize and collectively bargain, and we thank each of them for their commitment to working families.

“But what makes Joe Biden different isn’t just his support for our rights on the job, but his support for good energy jobs. Eighty-five percent of IBEW members work in the energy industry, and our country needs a realistic plan to combat the ongoing threat of climate change without putting energy security or working families at risk.

“Joe Biden has listened to IBEW members, and his energy policy has been shaped by deep, meaningful conversations with the professionals who will build and maintain the energy grid of the future. He backs an all-of-the-above approach to slashing carbon emissions. He also has proposed the largest-ever investment in clean-energy technology, as well as an aggressive clean-power infrastructure plan that will make the United States a global leader in fighting climate change, while putting tens of thousands of Americans to work building the energy economy of the future.

“It’s not typical for the IBEW to endorse this early in the primary process, but this year there’s an urgency we haven’t seen in a very long time. Energy policies made today will reverberate for decades, and it’s paramount that we have a candidate for president who supports IBEW jobs and IBEW values.

“As the largest union of energy professionals in the nation, we have been a leader in promoting clean, renewable power, from installing solar panels and building wind turbines to fighting for pro-environment, pro-jobs legislation on the local, state and federal level. No organization in the world has trained more workers for the green economy than the IBEW.

“Joe Biden’s support of a robust 21st century infrastructure plan will create significant growth not only for the IBEW’s Construction and Utility branches, but also Telecommunications, Broadcasting, Manufacturing and Railroad. In addition, we can count on him to roll back this administration’s attack on thousands of IBEW members who work in government jobs.

“Vice President Biden has listened to what we have to say about one of our nation’s most pressing challenges, and I know IBEW members will have a seat at the table in a Biden White House.”

Workers Pause on April 28 to Remember the Fallen