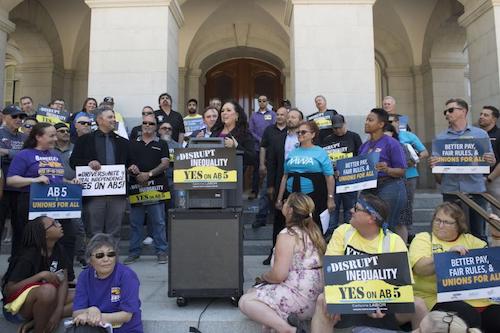 A trailblazing California law that IBEW members fought for will extend job rights and benefits to hundreds of thousands of workers long misclassified by employers as independent contractors.

“This bill gives millions of workers basic protections and fundamental rights in the workplace,” Ninth District International Vice President John O’Rourke said. “This is a huge victory for all working people in California. I hope it sets the stage for the adoption of similar legislation across the country.”

Gov. Gavin Newsom signed the bill Sept. 18, a week after it passed with unanimous support from Assembly and Senate Democrats, and none from Republicans. The law goes into effect in 2020.

“Today, we are disrupting the status quo and taking a bold step forward to rebuild our middle class and reshape the future of workers as we know it,” said Assemblywoman Lorena Gonzalez, the bill’s author.

“Working Californians who have been kept off payroll as employees will gain access to basic labor rights for the first time, including rights to minimum wage, overtime, unemployment insurance, workers’ compensation, paid sick days, paid family leave, workplace protections against harassment and retaliation, and the right to form or join a union,” she said.

While other states have taken steps to address misclassification by extending jobless benefits and workers’ comp to independent contractors, California’s law is considered the most sweeping action yet. In addition to dealing more broadly with the gig economy, it gives the state and cities the right to override arbitration agreements by suing companies that misclassify workers.

O’Rourke anticipates that the law will open new doors for unions in a way similar to the unexpected effect of last year’s U.S. Supreme Court ruling in Janus v. AFSCME.

“What we found out is that Janus has helped us, and I believe this will be another pivotal piece gathering workers together and empowering them to become union members,” he said.

Anti-union activists and their billionaire backers expected Janus to break the backs of public employee unions by allowing workers to withhold the fees that cover contract talks, grievances and other costs of direct representation.

Instead, IBEW locals and other unions in California and nationwide turned the tables, increasing membership by educating workers about the dollars-and-cents value of solidarity and a voice at work.

The new law largely affects workers employed by contractors in California’s $400-billion tech industry and by gig-economy companies such as Uber, Lyft and DoorDash. Taxi drivers, translators, medical workers and others wrongly classified in more traditional jobs will also benefit, although many industries won exemptions from the law or delays in adhering to it.

For IBEW members, O’Rourke expects the law to make it harder for construction companies to drive down wages by treating nonunion electricians as independent contractors.

The law codifies and clarifies a unanimous 2018 ruling by the state Supreme Court against a national package delivery company. The employer, Dynamex, reclassified drivers as independent contractors, requiring them to use their own vehicles and pay out of pocket for gas and related expenses.

The court set a strict test to determine a workers’ employment status, which is now part of the law. In effect, workers are regular employees if their tasks are subject to a company’s control and are central to its business.

The Los Angeles Times described it this way: “A solo plumber with his own company who is hired by a bakery to fix a leak can be an independent contractor. But a plumber working regularly for a plumbing company and sent out on jobs must be an employee.”

Uber and other major gig-economy employers lost their fight to be exempted from the law, and are now seeking a ballot initiative in 2020. It is expected to ask voters to create a new category of workers who would be independent but qualify for some benefits and a guaranteed minimum wage.

Newsom said he plans to bring together leaders from the Legislature, labor movement and business community to “support innovation and a more inclusive economy by stepping in where the federal government has fallen short and granting workers excluded from the National Labor Relations Act the right to organize and collectively bargain.”

His signing statement indicated that doing so is urgent.

“The hollowing out of our middle class has been 40 years in the making and the need to create lasting economic security for our workforce demands action,” he said. “Assembly Bill 5 is an important step. A next step is creating pathways for more workers to form a union, collectively bargain to earn more and have a stronger voice at work.”